Just beyond the Slovenian-Italian border is the hill Tabor by Repen, with a church and a meteorological observatory – from there one can see on one side to the Alps, but on the other side I could already see the coast. All I had to do was to descend across Opčina to Trieste. However, Trieste’s streets, with heavy traffic of cars and scooters, are not very bike-friendly even on the way down – the only way down to the city is a one-way street which alternates the traffic direction up and down upon a switch of a traffic light, the descent is 24% and thus to make matters worse is the street paved with bricks… But unlike me, local girls on scooters deal with the slope effortlessly.

In Trieste, I take a day and a half to explore the city. The narrow streets provide a pleasant shelter from the summer heat (as in other Italian cities, they know how to get ready for the heat – narrow streets, rooms shaded by window shutters and having high ceilings), the sea can be glimpsed in between the houses, the soundtrack is provided by seagulls. The seaside atmosphere stands out especially during the evening.

From Trieste I first head back along the coast, visiting the romantic castle of Miramare, built for the austrian archduke Maximilian – but for him Miramare was not enough, he let himself be be declared the Emperor of Mexico and thereafter was shot there in Mexico. 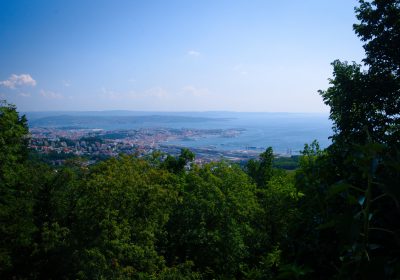 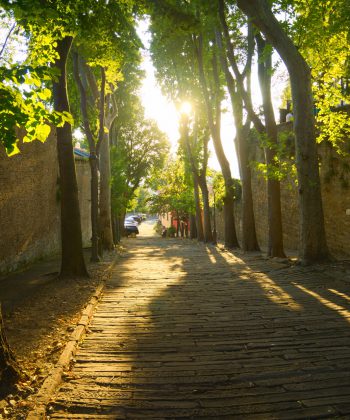 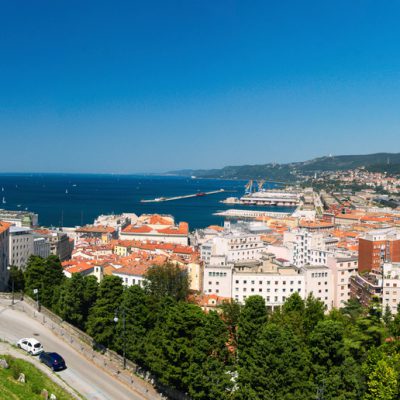 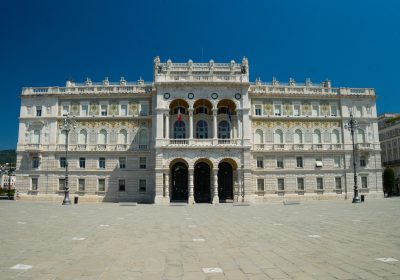 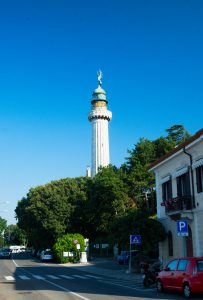 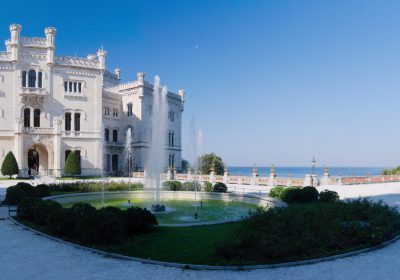 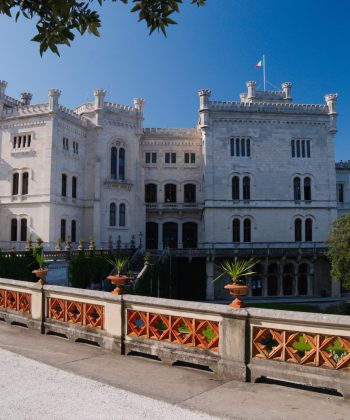 And to get back to Slovenia I have to cross a low but steep border karst ridge, again through the bush…

I return northwards along the western border of Slovenia, through the valley of the river Soča. There I enjoy the most pleasant camping on the way – on smooth, regularly grazed meadows, next to the tent having a bath in beautifully clear river, with river shores and bottom made of little white marble stones (so even the feet remain as clean after a bath as in a bathroom).

But even this river leads me up to the mountains, where it is necessary to cross the Vršič pass at 1611 meters above sea level. On the other side I descend to the valley of river Sava, directly towards its source, and the next day I continue from there over another mountain ridge to Austria. 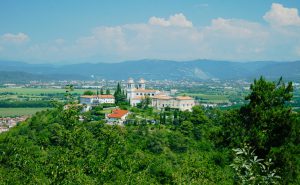 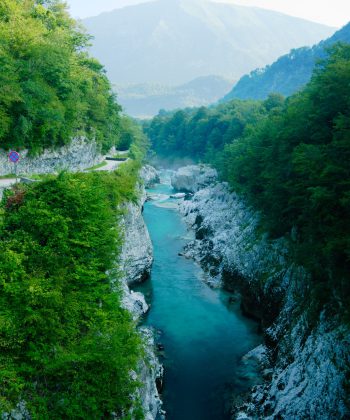 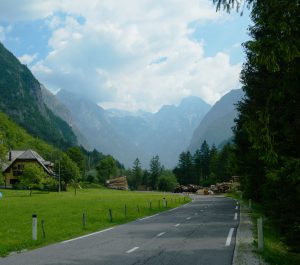 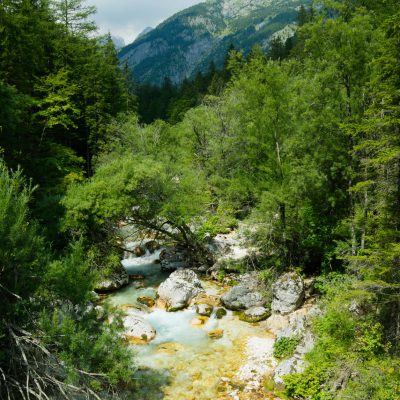 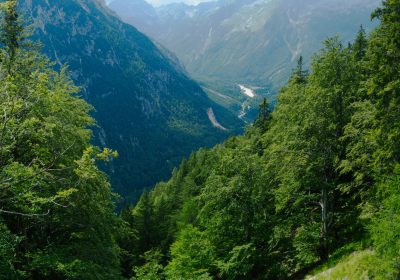 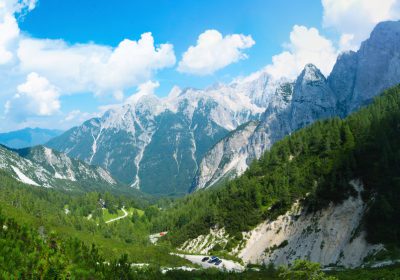 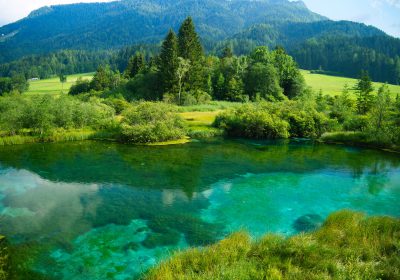 The Austrian-Slovenian border is not ideal for illegal forest crossing on a bike – the steep Alpine slopes do not leave much space for such attempts… My only chance is to try the official crossing point. My plan B is a detour – forest-crossing to Tarvisio, Italy. I climb up the ridge on the road, at the border checkpoint I try to put on a face of a local guy who is just casually passing by, the Slovenian customs officer does not ask for any documents, so I can continue down to the Drava valley in Austria.

I have already cycled through the Tauern Alps before, so this time I deliberately choose another route – via Obervellach and Mallnitz, but there the road ends and pedestrians, cyclists and cars all have to get to the next valley around Bad Gastein by boarding a train going via a train tunnel.

From here, the route is more or less still down: through Salzburger land, to the Salzach valley, via Zell am See, through the Saalach valley and across a tip of Germany in the Berchtesgaden region to Salzburg. I’ve been to Salzburg by bike already, so I just go around the city towards the lakes above it – to Wallersee (riding up from the city on a pleasant bike path on a former railway track), and further around Mondsee and Attersee and then along the river Traum to Linz.

Above Linz I have to go up the last very steep climb, following the local Stations of the Cross route to the church on the hill Pöstlingberg. At times I had to push the loaded bike up the hill and there I felt full sympaty with Jesus pictured at each of the Stations. From there I continued north, roughly along the Große Rodl river to the Šumava mountains. 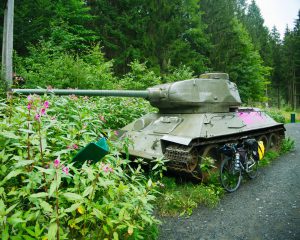 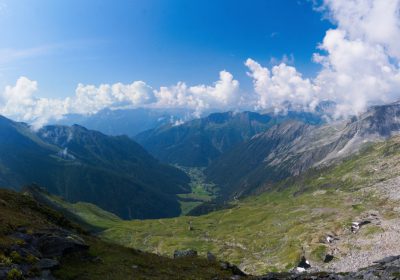 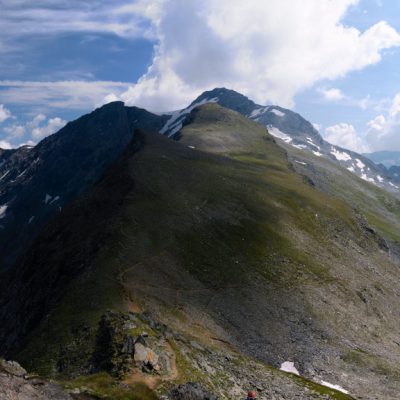 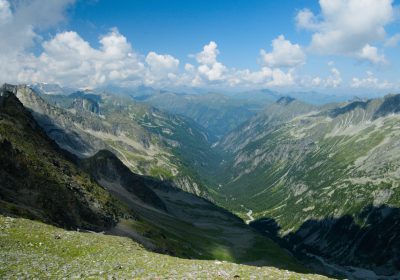 I crossed the border from Austria again by forest road, but this time (presumably) completely legally. Then I continued across the border forest to Horní Dvořiště, around to the river Malše, streaming full up to brink of overflooding, then to the Římov dam and with a detour to the village architecture reservation in Holašovice I went for a train from České Budějovice home. 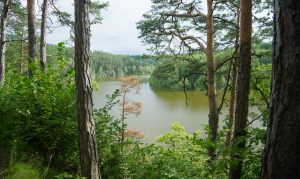 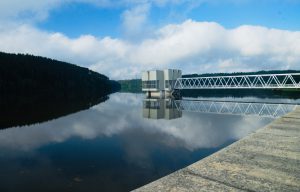 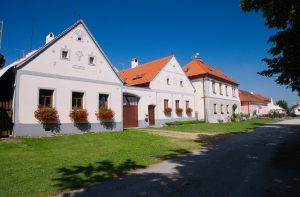 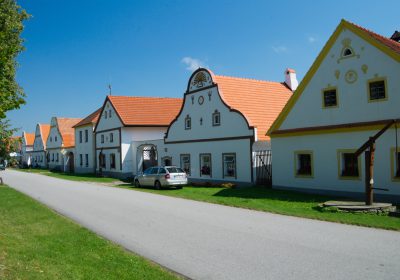 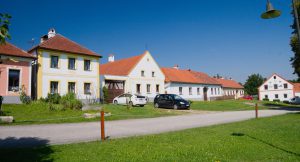 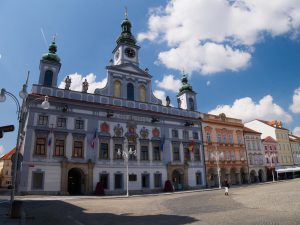 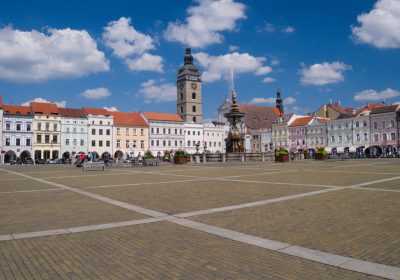 In 14 days I drove through 5 countries and within that through 5 Austrian federal lands, I rode 1461 km on a bike and 13 km by a car-transport train, I punched one inner tube, but I hopefully avoided all infections.