After some time spent in rich Denmark, Rostock made really East German impression: an industrial harbour, infrastructure more for cars than for people, housing projects made of prefabricated blocks. 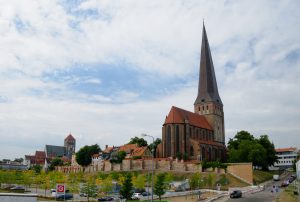 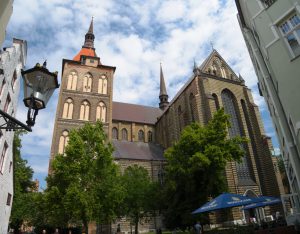 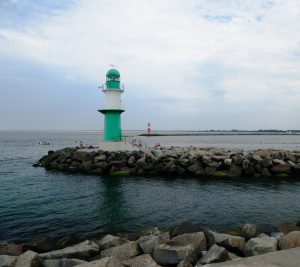 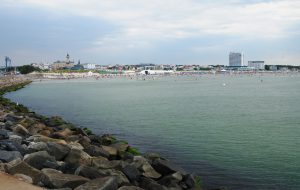 But just out of the city, I could continue my programme – a ride between the sea on one side and the lagoons and lakes on the other side, in the hot weather pleasantly shaded first by the coastal forests and then by the Vorpommersche Boddenlandschaft National Park. Finally in Stralsund I crossed over the dam to Rügen. 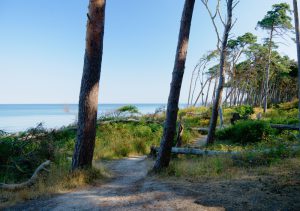 Rügen is an interesting natural area, with a rugged coastline where the open sea, almost enclosed brackish lagoons and fresh water lakes alternate. Unfortunately, there were fewer opportunities for a bath because the almost closed lagoons were already getting green in this hot and dry summer. But what remained were all the layers of local history: Neolithic stone tombs, Slavic names of all the villages, streets still named after Marx and Thälmann, the Arkona Cape as a former Slavic fortress and shrine, just next to nineteenth century beacons and next to them the Wehrmacht bunkers and border and commanding bunkers of the East German People’s Army.

Or another historical relic, the Nazi holiday resort of Prora – a 4.5 km long complex served by three train stops, just recently a ruin, but now there are hotels, a hostel that is said to be the largest one in Germany and most of the complex is now turned into private holiday apartments. What is not yet renovated is just being rebuilt. So soon the Hitler’s and Speer’s dream will finally come true – tens of thousands of Germans enjoying their Strength Through Joy on the beach here. 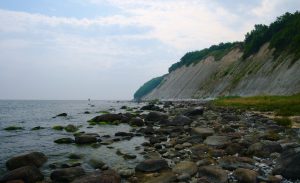 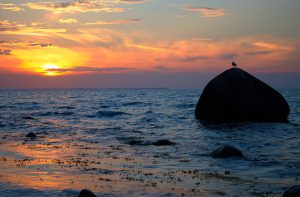 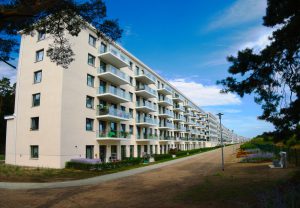 In Rügen I also heard Czech again after a long time – surprisingly not Polish, which I would expect here much more due to the location.

From Rügen I crossed by a ferry to the mainland. The way following the coast led through the Hanseatic town of Greifswald. To keep the nuclear theme of the trip, I wanted to see the local fusion reactor – a unique stellarator. If they managed to fine-tune it, it might one day actually make the bread cheaper, as we say in Czech. Unfortunately, while they show it throughout whole year, only in August has the whole university a holiday. As a weak substitute nearby stay remains of the largest nuclear power plant in GDR.

By another ferry I crossed from the mainland to Usedom island. This means first to Peenemünde, where Germans developed and tested the V2 missiles during the war, as well as nearby the V3 multi-charge long-range cannon.