I passed Latvia over its eastern edge, away from most cities (not that there would be so many of them in Latvia). So the landscape was similar as in Lithuania, with the lakes diminishing when coming from the south, but this was compensated by the last lake around Aluksne in the north.

In Daugavpils I stopped at an extensive baroque fortress, which was visibly still actively used up until the end also by the soviet army. The fortress is still home to many locals. The municipal buildings are slowly being reconstructed. 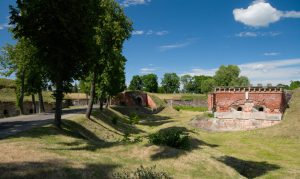 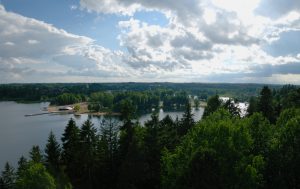 The last town before the border is Aluksne, situated at the aforementioned lake. While going there my chain broke apart, possibly because of not that expert installation of it in Kiev. Off course it broke just at a start of a coming rain. But otherwise I must praise the bike for its durability so far, despite the first week in Ukraine, where half of the front fender fell off, the cargo rack holding screw fell off and one pannier completely broke off – at that point I was afraid that if it will continue in this style, I will have to walk back on foot already the second week. But since then a new replacement rack screw broke in half still in Ukraine and now the chain – so hopefully the bike stays in a good condition later on, despite the previous stone-pit-stone Ukrainian roads and now the deep sand or terribly corrugated gravel Baltic roads.