By an easy ride through the valley, via Gmünd and then around the Drau river, I reached Villach and from there, from the Austrian side with an effort smaller than expected, I got up on the Austro-Italian border pass. 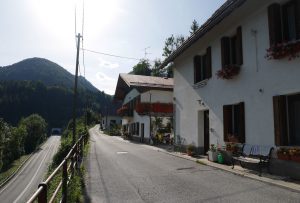 In Italy I have to start with a complain about local nature: during the night something in the forest bit a hole into my frame bag, despite hanging high on the bike.

But then it really started. Just behind the border, under a village of Coccau, starts Ciclovia Alpe Adria: on a canceled railway was built a brand new, smooth cycle route, which slowly declines from the Alps down. So while riding down effortlessly you can enjoy the views on the peaks of the Italo-Slovenian border, or the river and villages below the track while gliding over valleys using beautiful old bridges and tunnels… And this all lasts for 50 km! I am still excited when I just recall it. I definitely recommend visiting this to all lazy riders, ideally visit quickly, before the smooth new tarmac gets broken by roots and before all the railway and station buildings, now still more-less intact, totally decay. Because we all paid the new route from EU funds, but I am not sure whether there will be any funds left also for maintenance of the 50 km stuffed by steam era wonder turned into cycle route…

The rest of the way to the see was completely flat. These flat lowlands of Italy left me with mixed feelings: all I could see was artificially irrigated corn (maize). I actually wondered – cannot this have some negative impact on the environment, like errosion or draught? Only to arrive in a moment to a huge river, completely dry (one of many in the Italian lowlands).

Finally I reached the shore, which is from Bibione till Venezia continously occupied by hundreds of thousands of mostly Germans and their cars – mass tourism is measured here in tens of kilometres. But because I reached the see by the evening, I could also enjoy a bit of the mass tourism myself – the beach with all the sunbeds was all mine for a warm evening. 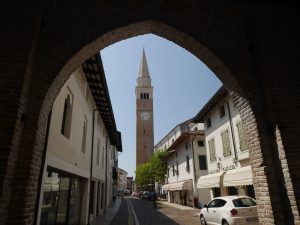 Off course I arrived to Venezia stylishly – by a ship. Conclusion: the Venetian narrow streets are cute, but too much tourist-filled.

By the way, in case anyone would think of going there by bike, please consider what I didn’t during my planning: Venezia, that is a lot of little isles connected by bridges. And all the bridges have stairs… There is a public ship transport, which could get you a shortcut where you need, but it officially does not take bikes on board within inner city, so it will not save you. Although, the city transport rules, same as road rules in general, seem to work in Italian fashion: I was able to get on board a ship from Punta Sabbioni to the outskirts of Lido, and when I somehow got off the board one stop late, in the interior city by San Marco (where bikes are already reportedly not allowed), the conductor was absolutely not surprised. 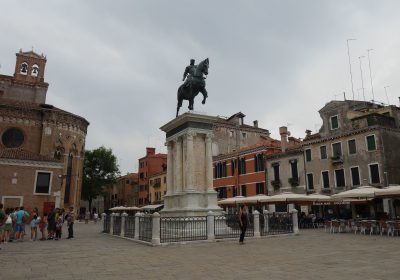 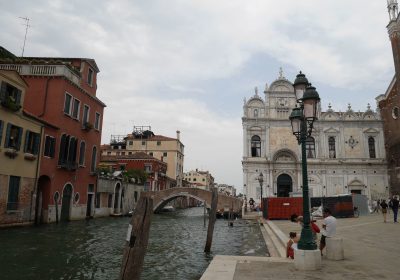 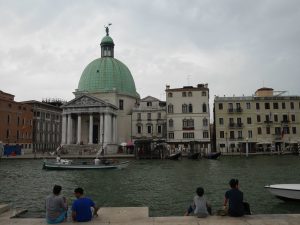 Just behind Venezia I was caught by a thunderstorm, but that was then compensated by a fresh air and beautiful sunset over the bay and channels around Chioggio.